In a male-dominated industry, Winx has shown the world just what girls are capable of doing. The Australian-bred mare has become a racing legend, as she is one of the most successful racehorses of our time.

Winx was born on September 14, 2011, at Coolmore Farm in Jerrys Plains, New South Wales, Australia. Trained by Chris Waller, the bay Thoroughbred mare’s historic career is one for the ages. She won 37 of her 42 starts, including winning 33 races in a row.

Winx’s owners are Magic Bloodstock Racing (Peter Tighe), Richard Treweeke and Debbie Kepitis. She was bred by John Camilleri’s Fairway Thoroughbreds and sold for $230,000 at the 2013 Magic Millions Gold Coast Sale as a yearling.

Here are common stats about Winx:

Here are eight facts about Winx.

1. Winx’s Sire is Street Cry and Her Dam is Vegas Showgirl

Winx is out of Vegas Showgirl and by Street Cry. The Irish-bred Street Cry is the winner of the 2002 Dubai World Cup, along with the 2002 Stephen Foster Handicap.

Winx’s isn’t the only famous filly Street Cry has sired. He is also the sire of the incredible Zenyatta, making Winx and Zenyatta half-siblings. Winx’s dam, Vegas Showgirl, was bred in New Zealand. During her racing career, she won seven of her 35 starts.

2. Her Name is Inspired by Her Dam

Based off her dam, Vegas Showgirl, Winx’s name is inspired by 1970-80s Vegas burlesque shows, where the men would wink at the exotic dancers performing.

“If you’ve ever been to Vegas and go to see a couple of shows you realise there’s some pretty good sorts up there … you know cheeky bums and lovely t**s and that sort of thing,” Richard Treweeke told Channel 9.

“And if you like them you wink … and if she likes you she winks back.”

Considered one of the best racehorses in history, Winx’s racing career is one of the best Australia has ever seen. She won an incredible $26,451,175 in earnings, making her the all-time highest prizemoney earner in Australia. Winx has over $10 million more than the horse with the second most winnings in Australia, Redzel.

4. She Once Sat Atop Longines World’s Best Racehorse Rankings

5. Winx was the First Horse to Win the Cox Plate Four Times

The W.S. Cox Plate is Australia’s most prestigious weight-for-age race. Winx became the first horse ever to win the race four times, coming in first from 2015-2018.

The Cox Plate is a G1 race that takes place every October at Moonee Valley Racecourse in Melbourne, Australia. Named after the racing club’s founder, William Samuel (W.S.) Cox, it has a purse of $5 million. From 1999–2005, the race was part of the exclusive Emirates World Series Racing Championship, a global “grand prix” in the sport of horse racing.

6. She is Only the Third Horse to be Inducted Into the Australian Racing Hall of Fame While Still Racing

On May 17, 2017, Winx became only the third horse ever to be inducted into the Australian Racing Hall of Fame while still competing. Interestingly enough, the other two horses, Sunline and Black Caviar, are also both mares.

Throughout her career, Winx has also taken home numerous other awards. From 2015-2019, she won the Australian Horse of the Year and the Australian Champion Middle Distance Racehorse. From 2016-2017 she won the World’s Top-Ranked Turf Horse and in 2018 she took home the coveted Secretariat Vox Populi Award.

In addition, she also has the honor of a G1 stake named after her. She even has her own Australia Post stamp issue. The Royal Randwick even named their grandstand the Winx Grandstand and both Moonee Valley and Rosehill Gardens have statues of the iconic mare.

7.  Winx Has Her Own Breyer Model and Commemorative Beer

Those who love Winx can now bring the famous racehorse to their homes. In 2020, Breyer released a model horse of Winx. The stunning model is a spitting image of the beautiful bay mare.

In 2018, Carlton & United Breweries released commemorative Winx cans. The beers were first sold along the track at Moonee Valley Racecourse.

8. Winx Had a Short Stride Length

Winx’s stride measured 6.76 meters. Though it’s not particularly long, especially compared to the legendary Phar Lap and Black Caviar, who both have stride lengths close to 8.5 meters.

Her success is not credited to her stride, but instead to her “freakish” cadence. She is able to take 14 strides every 5 seconds, compared to most of her rivals at 12 strides. “This means she can settle or accelerate at any time during a race”, said Dr. Graeme Putt.

Throughout her career, Winx has had six riders, with Hugh Bowman being her main jockey. Jason Collet was Winx’s first jockey.

Tommy Berry, James McDonald and Larry Cassidy also held the position of Winx’s jockey as well and have won with the mare. World champion Joao Moreira is the only jockey to ride her and not win, though he came in a very respectable second place with Winx.

Does Winx Have Any Foals?

Winx’s career as a broodmare began in 2019. Her first breeding was with I Am Invincible, who is the sire of over 60 stakes winners. Sadly, the foal was stillborn in October 2020.

In August 2021, it was announced that Winx will be bred to Pierro in spring. Pierro, who won 11 starts as a racehorse, is the sire of 143 winners so far.

“Winx has been given a full year to recover from her ordeal, and we are pleased to report that the mare has returned in great condition. She has been enjoying life on the farm with some friends while she is preparing to go back to the breeding barn this spring,” said her connections.

What Does the ‘M’ Mean on Winx’s Racing Silks?

The racing silks worn by Winx’s jockey were blue with a big ‘M’ on the front. The ‘M’ stands for Magic Bloodstock Racing. 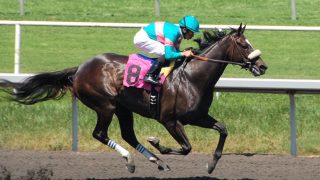 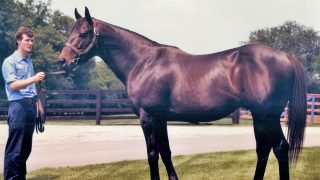 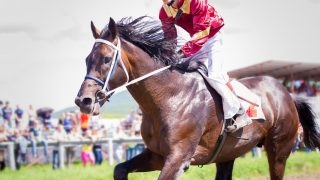