However, if a female horse is used for breeding she is also referred to as a broodmare and once she has a foal, she is a dam.

When it comes to horse racing, the cut off age for a filly is often five years old. However, fillies can race as young as two.

What is the Difference between a Filly and a Foal?

Foal is a horse gender-neutral, so both baby male and female horses can be called foals. However, the term filly can only be used for female horses.

A mare is a female horse that is over the age of four. Mares are mature female horses that can be used for breeding and riding.

It is very rare for a female horse to be spayed because it can be a dangerous procedure. Since there is no special term used, they are simply called a spayed mare.

When a mare is used for breeding, she is called a broodmare. Once a mare becomes a mother, she is a dam.

Though a female horse can be sexually mature by 18 months, that is considered too young for breeding. Many people will wait to breed their mares until they are at least four to five years old.

A mare can typically be bred between the ages of 4 – 16, though some can have foals at a later age. Since the gestation period of a horse is an average of eleven months, a horse can have one foal a year.

Also, read our guides on what is a male horse called, what is a gelding horse, 45 amazing horse facts and facts about foals. 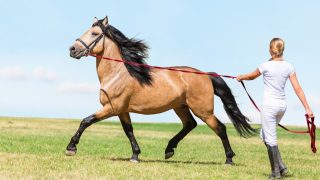