Our readers support us. This post may contain affiliate links. We earn from qualifying purchases. Learn More

Competing on horses has been around for as long as man has been riding a horse. Some of the most famous cases of early horse sports is chariot racing that goes as far back as the ancient Egyptian.

To help you learn more about the common horseback riding sports, we’ve discussed each one in detail below and categorised them by English or Western horse sports. 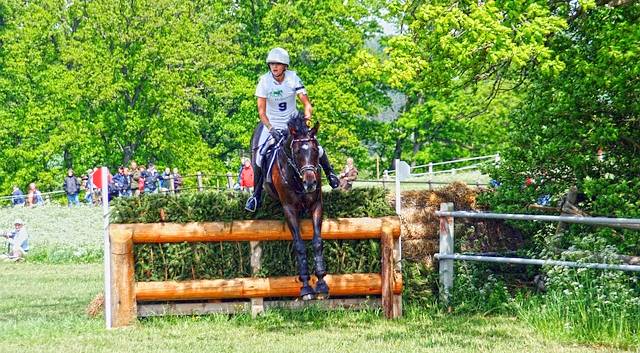 Eventing comprises 3 different disciplines (dressage, show jumping and cross county) and as such is the triathlon of the horse world.

The horse must be calm and obedient enough to perform a dressage test, sufficiently athletic to complete a round of show jumping and then fit, fast and bold enough to tackle a cross country course of between 20 – 30 obstacles over varying terrain.

Competitions are either short or long format. The short format means all three activities take place on one day. In long format, the three tests remain the same but run in a different order and with the addition of roads and tracks and steeple chase.

On day one, riders complete the dressage test. Day two has 3 parts; roads and tracks ridden at a steady trot, then a steeple chase ridden at a fast gallop. Once the horse is cleared by the vet check after the steeple chase, the last part is a timed cross-country course.

Day three decides the overall placings with the show jumping round. This is probably the ultimate test of the horse’s fitness, toughness and training.

In show jumping the horse and rider are required to complete a course of obstacles which may be uprights, spreads or combinations of jumps in doubles or trebles. This horse riding sport is designed to test the horse’ agility, scope and carefulness. Additionally, it also judges the riders to judge the correct speed and line.

The winner is the combination that completes the course in the fastest time with the fewest faults. Faults are given for knocking a fence down or stopping.

At the lower levels courses are divided into 2 parts. The first part has an optimum time and riders are penalized for knocking down fences or going over the optimum time. The second part is to be jumped as fast as possible whilst leaving the fences up.

At the higher levels riders need to jump clear in order to progress to the second round which is a jump off against the clock.

The purpose of dressage is the athletic development of the horse and it can take over 10 years to develop the horse’s strength, balance and skill to the level required at the top.

At a basic level, the goal is rhythm and relaxation. It can take 10 years to work up through the scales of training to the top level of the sport. Successful training is demonstrated in competition through the performance of tests of prescribed movements each awarded a score out of 10.

Judges are looking for horses that perform the movements in a calm, supple and flowing manner.

The very best dressage riders make it look like they are not even moving in the saddle while performing intricate and demanding steps such as piaffe or flying changes.

Often referred to as “dancing with horses,” dressage is like the ballet of the horse world, when done well it is graceful, elegant and full of power.

Quick fact: The name dressage comes from the French word for training.

The discipline of showing encompasses a wide variety of classes for all different ages, breeds and types of horses. They may be ridden or in hand.

Young stock or children on ponies will be shown in hand with the emphasis on the horse’s conformation, paces and manner.

Ridden classes can take longer to judge as they require the horse to be paraded with the group under saddle, produce an individual show, be ridden by the judge and then examined without tack. Marks are awarded for each of these sections to decide the winner.

Polo is one of the oldest known team sports developed in India as a training game for cavalry units and known as “the sport of kings”. Two teams of four riders each compete to score as many goals as possible in a 1.5 – 2 hour game, divided into 7 minute periods called chukkas.

There is a 4 minute interval between chukkas and a 10 minute half time. Due to the high intensity of the game, at the top level players may change horses every few chukkas.

Umpires monitor the game to ensure the safety of both players and horses. The player who hits the ball generally has the right of way and other players cannot cross the line of the ball in front of that player.

Players can use their mallet to block the swing of an opponent or use a bump or ride off (similar to a body check in hockey) to move an opponent away from the ball.

Racing takes place either “on the flat” or over obstacles. Flat racing is a test of speed, stamina and the skill of the jockey to choose the right tactics for their horse, the racetrack and the unfolding race. Races are held over distances from 5 furlongs (a sprint) to 2 miles.

The majority of flat races are run on grass, although synthetic or all weather tracks are also becoming popular. Horses can race in various categories – classics, group and listed races, maidens or handicaps based on their sex, age or ability of the horse.

The sport involves individuals or groups of up to 3 riders performing movements on a horse whilst they are being lunged on a 15 metre circle in canter. There are 2 rounds – the compulsory routine and the freestyle.

Movements are choreographed to demonstrate beauty, brilliance, power, strength and elegance all in harmony with the horse.

All vaulting tests are scored with an overall score out of 10 and judging is based on technique, form, difficulty, balance, security and consideration of the horse. The horse’s way of going makes up 20% of the final score.
Types of Western Horseback Riding

Reining requires the horse and rider to work together to complete an individual pattern of movements including galloping small and large circles, flying lead changes, quick spins and sliding stops. Each pattern takes between 2.5 and 3 minutes to complete.

A panel of judges use a scoring system to evaluate each performance based on smoothness, finesse, attitude and quickness. The aim is a horse that is willingly guided with little or no apparent resistance.

Cutting is a sport that developed on the ranch. It requires horse and rider to demonstrate their skill in separating (or cutting) individual cows from the herd.

The rider tells the horse which cow to separate from the herd, then drops the reins. The horse takes control of the cow the rider has picked and must be smart and athletic enough to keep the cow in the middle of the pen away from the herd.

This discipline has been described as “the horse’s dance of mastery over a cow”.

Most of us as children will have taken part in gymkhana games used as a fun way to develop our balance and riding ability on a horse. However, it can get seriously competitive as you go up the levels.

Barrel racing is a rodeo sport in which horse and rider must navigate 3 barrels in a cloverleaf pattern in the fastest time. The barrels are arranged in a triangle formation, one directly ahead, one to the left and one to the right.

From a standing start horse and rider must complete the pattern around the barrels from left to right and back as fast as possible. Simply the fastest run wins although there are penalties for hitting or knocking over a barrel.

Team Chasing is a sport pitting teams of four riders against each other over a cross country course of approximately 2 miles with around 25 fences to jump.

In essence, it’s like an old-fashioned hunter trail but over open countryside and natural obstacles like hedges. The winners are the team that complete the course clear in the fastest time. The 3rd rider of the team stopping the clock as they cross the finish line.

There are two main types of long-distance riding – endurance and competitive trail riding. Endurance rides can cover up to 160kms (100 miles) in one day and is akin to the marathon in running. The winning horse is the first one to cross the finish line.

It requires the rider to exercise judgment in the correct speed for the terrain and the most economical pace for the horse to maintain over a sustained distance. Vet checks throughout the race determine whether the horse is fit and well enough to continue.

Any breed can compete but the Arab generally dominates the top levels due to its innate natural stamina and toughness.