A small number of horse breeds grow extra-long hairs below their knees and hocks, sometimes covering their hooves completely.

Horse breeds with long hair include the Gypsy Vanner, Friesian, Clydesdale, Shire, and Dales Pony. These horse breeds all have long manes, featured hooves, and fluffy coats in winter.

Most breeds boasting feathers are either cold-blooded draft horses or ponies. Horses from the Flemish region of northwest Europe have had a considerable influence on which breeds have long hair and feathered hooves.

There is no doubt that furry horses with feathers catch the eye, especially if they are well-groomed and prancing like a showy dancer. There are those of us that love feathered horses while others spend hours trimming away every vestige of hair from their horses’ legs.

Why Do Some Horse Breeds Have Feathered Hooves?

Some horse breeds developed feathered hooves to keep their legs warm during winter and channel water away from the back of the pastern and heels. This trait is typical of breeds that developed in cold and wet northern climates.

Interestingly, all horse breeds carry the gene responsible for feathered feet. The reason we don’t see heavy feathering in lighter horses is that this gene is linked to bone density. Because denser bones result in thicker feathering, many draft horse breeds like the Shire or Clydesdale have abundant hair on their feet.

Feathers also seem to protect horses’ lower legs from brambles and sharp edges as they move through dense shrubbery or rocky terrain.

Friesians are the movie stars of the horse world, often seen in advertisements in their solid black color. They also have a proud head carriage with very thick flowing manes and tails, and exorbitant feathers flowing around their legs.

Friesians are strong, compact horses of medium height, standing at around 15 hands. These horses boast a high stepping action made for maneuverability instead of speed; characteristics they needed to be the steady war horses they were in the past.

Illustrations of Friesians from medieval times closely resemble their modern looks. They are willing and energetic yet are calm and easily trained.

Nowadays, some Friesian horse breeders tend to breed selectively for finer features. These horses tend to be considered more “Show” types. You will see the adaptable Friesian pulling a carriage or equally winning in a dressage arena.

Many people now recognize Clydesdale horses because of their role as the high-profile Budweiser beer wagon team. The adorable TV adverts featuring the breed have enchanted viewers around the world.

Clydesdales originated in the area of the River Clyde in Scotland in the early 1800s. The breed later received an infusion of Shire blood in an attempt to increase the horses’ height.

The feathers of Clydesdales may have originated from the influence of Flemish stallions taken to Britain to help drain The Fens in the 16th Century.

In the past, Clydesdales had an exceptionally important task plowing and tilling millions of hectares into valuable agricultural land. They became the most important work horse breed in newly established Victorian British colonies like Australia and New Zealand.

The breed went from being hugely valuable and popular to vulnerable throughout the world. There are still limited numbers, thanks to enthusiasts who kept the breed alive. Clydesdales were often crossed with Thoroughbreds to produce athletic warmbloods.

The breed was initially smaller than other draft breeds, but modern breeders prefer larger animals with an average height of over 16.2 hands. Despite their size, Clydesdales are gentle giants, high-stepping, and active movers.

They are always a solid color – bay or black, and often have white markings to their knees or hocks, adding to their showy presence.

Clydesdale owners often wash their horse’s legs, then use dry sawdust to soak up the moisture around the feathers until they are dry and silky looking.

The Shire is another showy British horse breed with a distinctive presence. Shires are very tall horses, sometimes over 18 hands, and are usually black, bay, or grey. “The Packington Blind” stallion is often considered one of, if not, ‘the’ foundation stallion for the Shire breed, and he stood at stud from 1755 to 1770.

Flemish horses also influenced the Shire breed, adding long furry hair around their hooves. Meanwhile, cross-breeding with Clydesdales in the 1950s and 60’s refined their feathers.

Like the Clydesdales, Shire horses often towed drays to deliver beer to inns and taverns. They are excellent cart horses and were a popular choice for deliveries throughout England. Shires were also the horses chosen to plod reliably along the canals, towing boats upstream and working the dockyards.

As its name suggests, Gypsy Vanners were bred initially by the Romani travelers of Britain and Ireland. The Romani essentially chose their horses and ponies from those suitable to pull their various living quarters. Cobs often fit the bill.

In keeping with their beautifully decorated vardoes, the Romani liked their cobs to be distinctive and eye-catching. Colored or black and white horse breeds such as piebalds and skewbalds are commonly sought after.

At times when colored horses were unfashionable, the Romani were more than happy to take them, including colored Shires. These crosses produced solidly built animals strong enough to work over long distances yet calm enough to be tied up for long periods.

Hackney horses were also crossbred to bring high stepping knee action, but these fine-boned horses were not robust enough, so the cold-blooded Shires and Clydesdales crosses remained in favor.

Considered an ideal horse breed for beginners, Gypsy Vanners are of medium to large cob build. The Gypsy Vanner studbook was launched in the USA in the 1990s.

Here is a video of Gypsy Vanners with stunningly long manes and furry feet:

Fell ponies are a furry horse breed native to the north of England – Northumberland, Cumberland, and Westmorland, sharing their origins with the now extinct Galloway pony.

Like many country breeds, Fell ponies were bred for versatility – riding, driving, and light agricultural work. The fluffy breed’s genetics possibly go back to Roman times when the soldiers patrolled Hadrian’s Wall.

Fells are characterized by their stamina, intelligence, hardiness, and wiliness to work regardless of conditions. As sturdy pack ponies, they carried heavy loads of iron, copper, and lead ore as well as slate. Their energy-efficient walk meant they could cover long distances, up to 390 km in a week.

The Fell pony breed generally occurs in solid colors such as black, brown, bay, or grey.

Like the Fell Pony, Dales is another fluffy horse breed that originated in northern England in the Yorkshire Dales area. Similar to the Fell, the Galloway pony features in its ancestry.

Dales are larger in stature but were used likewise for carrying lead and iron ore used in smelting the lead, sometimes up to 110 Kg each trip.

Their reliability and steadfastness meant the ponies were usually packed “loose,” that is, free to follow the trained lead pony without ropes. The British Army also used them during the First and Second World Wars.

Dales Ponies are predominantly black, although there are brown, bay, grey, and roan colors as well.

These small draft horses originated in Sweden but can also be found in Finland, Norway, and Estonia.

Swedish Northern horses grow extremely thick winter coats and long, dense manes and tails to combat the cold. Their docile temperaments mean they accept living inside for long periods when snow cover is too deep for safe outside exercise.

A lesser-known horse breed with long hair and feathered feet is the Australian Draft. This hardy and strong horse breed is the result of crossing four European draft horse breeds, namely the Percheron, Shire, Suffolk Punch, and Clydesdale. The Belgian Draft also contributed to the breed in later years, as did some lighter horse breeds.

The Australian Draft is noted for its sheer strength and calm disposition. As a result of extensive crossbreeding, there are various colors and body types within the breed. White markings are undesirable anywhere but below the knee.

Similar to other draft horse breeds, mechanization in the 20th century has brought breed numbers down. In 1979, the Australian Draft Horse Society was established to preserve and promote the breed.

The Australian Draft is suitable for both riding and draft purposes and some farmers still use them as workhorses today.

The Ardennes is one of the oldest horse breeds with a history that traces back to Ancient Rome. The breed originates from the region of the same name that stretches across the borders of Luxembourg, Belgium, and France.

Historically, these heavy horses were used as war mounts and agricultural assets. Being a centuries-old breed, the Ardennes influenced various horse breeds of Europe and Asia. In our modern society, the breed is mainly used for heavy draft work and carriage driving.

Ardennes horses stand around 15.3 to 16 hands at the withers and are often bay or roan. They have especially heavy bones and thick feathering that covers the hooves. The breed is also known for maturing early and being relatively low-maintenance.

So, as you can see, there are not many breeds sporting showy feathers. However, you will surely notice them wherever they are, let it be under saddle, pulling a cart or wagon, or playing in a field. Long may their presence continue.

Also, read our guide on how much weight a horse can pull. 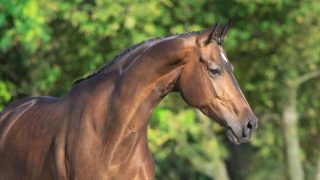