Our readers support us. This post may contain affiliate links. We earn from qualifying purchases. Learn More

Some days, before even getting on our horse’s back, we get the feeling that our ride won’t meet our expectations. Have you ever wondered why?

Chances are, you are speaking to your horse without even noticing exactly what message you are sending to him – whether you are doing it by shifts in your body posture, or even by exposing a different facial expression.

Understanding just how intelligent your equine partner is may help you comprehend him in a more effective way, but it can also contribute to making your rides and training sessions more efficient. Furthermore, it can make your time with them more enjoyable and ultimately safer.

How Smart are Horses Compared to Other Animals?

Compared to humans, some scientists have stated that horses possess the intelligence of a 3-year-old child. Also, most horses can recognize themselves in the mirror, understand human emotion, and learn complex tricks or commands.

To answer the question of whether some horses are smarter than other animals, it is not a simple answer. The reality is that direct comparison of intelligence across species cannot work, because the standards to measure what is considered smart are not the same from one animal to another.

Are Horses Smarter than Dogs?

Horses’ intelligence is often compared to dogs and cats. Cats and dogs are predators and will have a very different set of skills compared to horses.

According to Dr. Robert M. Miller, horses have the ability to learn faster, but dogs are better problem solvers. Additionally, many scientists believe dogs have been bred to be more intelligent to help humans, more so than horses. One such example would be the sheepdog.

Are Some Horses Smarter than Others?

Literature review tends to demonstrate that some breeds of horses are smarter than others. Although experienced horse trainers believe we must measure the intelligence of each horse differently. Thoroughbreds and Arabian horses are two breeds that seem to come on top of the list in terms of intelligence.

Some horses are even famous for their intelligence. A retired racehorse Lukas became one of the top liberty performers in the United States and attracted international acclaim for his intelligence. He can identify letters, numbers, shapes, and colors.

Lukas understood complicated concepts such as object permanence, spatial relationships, proportion, absentness, and so on.

In 2010, Lukas received the Guinness World Records title for the most numbers correctly identified by a horse in one minute – he identified 19 numbers. He has appeared on TV and in countless newspapers and magazines.

Another story of a famous horse dates to the late 1800’s. Foaled in 1889, a famous horse named Beautiful Jim Key, who was part Arabian, part Standardbred, has become famous for his many tricks, but also for his ability to read, write and do arithmetic for numbers below 30.

It was also claimed that Beautiful Jim Key was able to cite Bible passages in which horses were mentioned. Most interestingly, it has been emphasized that only patience and kindness was used to teach this horse.

Here is a fun video of some smart horses:

Literature review indicates that horses are highly social creatures that have many abilities such as recognizing human emotions, communicating with humans, learning via conditioning, match voices to faces, recognizing short words and their meaning – although the tone in which the commands are given are also important and should remain consistent with the word.

Moreover, they can learn their daily routine, such as feeding time. Horses can not only learn, but also have the ability to work things out for themselves (opening stable doors, freeing themselves from a delicate situation, like when they get stuck somewhere, etc.).

What we must keep in mind is that horses are fast learners, especially with correct and consistent training. Studies on equine intelligence discuss of horses’ cognitive skills rather than intelligence.

Studies on Cognitive Skills in Horse

Below are three interesting and relevant studies on horses’ observing skills, communicative skills and understanding skills.

In 2017, a study conducted by the University of Sussex illustrated that horses could read human body language and differentiate whether a person is displaying a dominant or submissive body posture, even when they are not familiar with that person.

The study was interested in seeing if the 30 domestic horses they worked with were more likely to approach a person with a dominant body posture or a submissive one.

Even though every person had given food rewards to the horses previously while displaying a neutral position, the horses were significantly more likely to go towards the people with a submissive body posture.

The results indicate that horses may communicate with body language and are not limited to their species – they also communicate in that way with humans. Horses will act upon what they perceive from your body language.

This is something to keep in mind not only for trainers but for anyone handling a horse – we should be more conscious of the signals we send to horses when we interact with them to create a positive relationship with them. 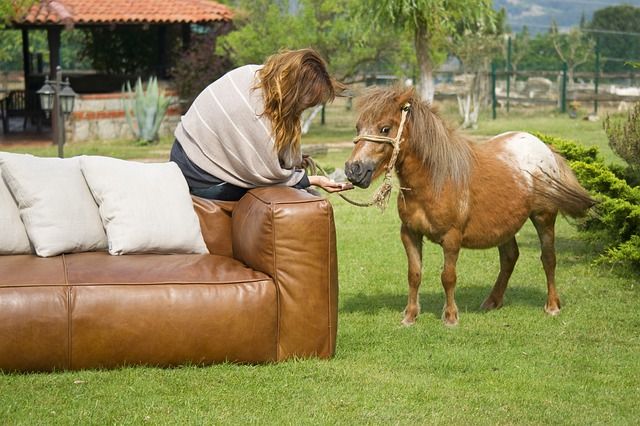 Can Horses Read our Facial Expressions and Remember Them?

In 2018, the Universities of Sussex and Portsmouth conducted a study demonstrating that horses can read human facial expressions and remember a person’s previous emotional state, adapting their behavior accordingly. In fact, during the study, photographs of people with different emotions (anger and happiness) were presented to 24 horses.

The results showed that horses responded differently according to the emotion observed; their heart rates increased when presented with a photograph of an angry person, therefore showing a negative reaction to the more aggressive emotions.

That said, the study has proven that horses have a memory for emotions. Every rider and horse owner should take this into consideration when manipulating or riding a horse as it can have an effect on the long-term relationship between horse and rider.

Horses Will Ask us for Help When Facing Unsolvable Problems

In 2016, Kobe University has published a study stating that when horses are facing unsolvable problems, they will use visual and tactile signals to catch human attention and ask for help.

To investigate horses’ social cognitive skills with humans in the context of problem-solving, food was hidden in a place only accessible to humans. The experiment was conducted with 8 horses and their student caretakers at the equestrian club of the Kobe University. It also suggests that horses will alter their communicative behavior according to humans’ knowledge of the situation.

In the first experiment, an assistant experimenter hid carrots in a bucket that couldn’t be reached by the horse. The goal was to observe how the horse sent signals to his caretaker when he arrived, unaware of the situation.

It turns out the horse would look, touch, and push the caretaker. The results show that when horses cannot solve a problem on their own, they will send visual signals (looking) as well as physical signals (touching and pushing) to humans.

In the second experiment, the experimenter tested if the horses’ behavior changed when the caretaker was aware of the hidden food.

It turns out, the horses would send more signals when the caretaker didn’t have knowledge that food was hidden, demonstrating that horses adapt their behaviors according to the humans’ knowledge levels.

The study not only demonstrated some behaviors horses use to communicate their demands to humans, but it also displayed the high cognitive skills possessed by horses, enabling them to adapt their behavior towards humans according to humans’ knowledge of a situation.

As a rider or a horse caretaker, we must remember not only to be more conscious of the signals we send to horses, but we must also be aware of the signals the horses are sending to us.

Whether we wish to give the best care possible to our horse or to improve our riding and training, we most definitely need to listen to what our horses have to tell us.

What do these Studies Show About a Horse’s Intelligence?

To conclude, those studies revealed impressive cognitive skills in horses. I believe the answer to “how smart are horses” is: very smart, and more then we may think.

Horses, as for other animals, have learned to communicate with other individuals to receive information about predators, for instance, which is a useful survival skill. It seems the domestication process, which started about 6000 years ago, has influenced those abilities. Keeping in mind that the contribution of horses to society has evolved from transport to companionship.

Their high social cognitive skills towards humans may explain in part the fact that humans and horses have a collaborative relationship today. Therefore, understanding communication traits in horses can enable us to create stronger bonds between horses and us, and ultimately, make us better caregivers, better riders, and better trainers.

Do Horses Get Attached to Humans?

Yes, horses can get emotionally attached to humans they interact with regularly. They are able to create lasting bonds with people they associate in a positive way.

Why Do Horses Nicker When They See You?

If a horse nickers and looks at you when they see you coming, it is their way of greeting you. Essentially, your horse is saying ‘hello, it is good to see you!”

How Do Horses Show Affection?

Horses can show affection to people in a number of different ways including nickering, walking up to greet you, resting their head on you, nudging you, and grooming you back.

Do Horses Recognize Their Owners?

How Long Will a Horse Remember You?

Horses are able to go several years, even more than 10, without seeing a person and are still able to remember them when they are reunited.