For thousands of years, humans have been captivated by the beauty of horses and have created some of the most incredible pieces of art based on these magnificent creatures.

For all you horse and art lovers, we have some beautiful sculptures and monuments you can visit.

From the stunning Kelpies horses to the enormous Chinggis Khan Statue, these amazing pieces of art showcase the beauty and history of the horse.

If you ever have the opportunity to see any of these, they are well worth the visit.

Also read, the 10 best horse statues you can buy.

Here are the most beautiful horse statues & monuments from across the world:

As the largest horses statue in the world, the Kelpies horse heads are truly a sight to behold.

Standing at 100 feet tall and weighing more than 300 tons each, they are an incredible feat of engineering.

They were created to bring Falkirk and the surrounding communities together, but they have done much more than that as millions of people visit them every year from all across the globe.

These stunning statues were built to represent the long lineage of working horses that helped shape Falkirk thanks to their contribution to society and the economy.

The Kelpies’ name comes from the mythical transforming beasts that are known to lurk in waterways, with the ability to take the shape of a horse with incredible strength and endurance.

If you are ever in Scotland, the Kelpies are well worth the visit. They can be viewed 365 days a year for free. They are most magical to see at night, as they are often lit up in different beautiful colors.

Built in 2011, the Still Water Horse is built entirely out of bronze. In fact, it is the largest free-standing bronze sculpture in London.

Artist Nic Fiddian-Green sculpted the piece as a larger version of a similar sculpture that used to previously stand there, which was called Horse at Water.

The statue is located in Marble Arch and is open to visitors. It makes a wonderful spot to have a picnic where you can view this elegant piece of art.

Not one, but seven life-size Thoroughbred statues race to the finish at Thoroughbred Park. This exciting statue exhibit is located in Lexington, Kentucky, which is home to some of the most successful race horses in the world.

The statues include incredible attention to detail and make you feel like you are getting in on the action of horse racing. Each horse and rider was constructed by sculptor Gwen Reardon in 1981.

If you are in Lexington, Thoroughbred Park is a must see. In addition to The Track exhibit, there are many other gorgeous horses statues that you can walk right up to.

The park is open daily and is a wonderful up-close photo opportunity.

This famous statue features Arthur Wellesley, the First Duke of Wellington, riding his noble steed, Copenhagen, who he rode at the Battle of Waterloo. The statue is located outside the Gallery of Modern Art in Glasgow, Scotland.

What makes this statue so unique is that locals often put a traffic cone on the Duke and sometimes even on Copenhagen.

No matter how many times the cones are taken down, they are put back on shortly after.

The statue was sculpted by Carlo Marochetti in 1844. In 2011, the Lonely Planet guide listed the statue as one of ‘Top 10 Most Bizarre Monuments On Earth.’

This iconic statue is well worth the visit, as it is one of Glasgow’s most famous landmarks.

As the largest equestrian statue in the world, the Chinggis Khan statue is truly a sight to behold. Located in Ulaanbaatar, Mongolia, the magnificent statue of the brutal leader Ghengis Khan and his horse features an archaeological museum at the base.

At 130 feet tall, this statue proudly stands across the gorgeous Mongolian wilderness. Built in 2008, the monument cost $4.1 million to construct. It is built from 250 tons of stainless steel.

For those seeking adventure, this amazing piece of art should be added to your bucket list. The museum is open every day and is truly a memorable sight.

The Horses of Helios (London, UK)

The powerful rearing horses are located within a fountain, making for an exquisite piece of art.

The bronze horses were sculpted by Rudy Weller and were installed in 1992. The horses, Aethon, Eous, Phlegon, and Pyrois, are the four horses of Helios, the god of the sun.

The horses appear to be bursting out of the water fountain, making for an impressive display.

If you are ever in London, you don’t want to miss seeing The Horses of Helios. No matter the time of day you visit, you will be in awe of this powerful piece.

The Horses of Saint Mark, also known as Triumphal Quadriga, is a set of four Roman bronze horse statues.

Originally located on top of the magnificent St. Mark’s Basilica in Venice, Italy these beautiful horses now reside inside for protection.

Though the maker and year when the horses were sculpted is unknown, they are made of gilded copper which has held up over time. It is believed they were built sometime between the fifth century BC or the fourth century AD.

The four horses used to pull a chariot are considered to be a symbol of triumph, as teams of four were often driven by an emperor.

These horses are a majestic piece of history that still shine today. Tickets can be purchased to visit the Triumphal Quadriga in the gorgeous St. Mark’s Basilica.

For those who love history and horses, they are well worth the visit.

The origin of the beautiful Leonardo’s Horse statue got its start over 500 years ago. The statue was commissioned in 1482 to Leonardo Da Vinci by the Duke of Sforza and was set to be the largest horse statue in the world.

Unfortunately, the 24 foot tall clay model was destroyed before it could be cast with bronze. However, approximately five centuries later Da Vinci’s surviving designs were used to create this stunning masterpiece.

After lots of hard work and dedication, two of Leonardo’s Horses were produced by sculptor Nina Akamu in 1999. The project to produce the statues cost approximately $2.5 million.

The primary cast is on display in San Siro Hippodrome Cultural Park in Milan, Italy which is open daily.

The American Horse resides at Frederik Meijer Gardens & Sculpture Park in Grand Rapids, Michigan, where it can be viewed every day.

The Day The Wall Came Down – (Berlin, Germany)

This powerful statue features five galloping horses leaping over a section of the Berlin Wall. The statue celebrates the day the wall came down, which reunited Germany.

Four mares and one stallion are depicted along with a two ton piece of the actual Berlin Wall. The larger than life horses symbolize the drive of freedom that is shared by people of all across the world.

One statue stands outside the George H.W. Bush Presidential Library and Museum in College Station, Texas, which guests can visit.

The other resides in Clayallee, Berlin, Germany where people can visit this compelling piece.

One of the most legendary racehorses, Secretariat was not only known for his speed, but also his incredible spirit. Keeneland is home to a larger than life Secretariat statue embodies the strength of this amazing Triple Crown winner.

The marvelous bronze monument was created by sculptor Jocelyn Russell along with her husband, Michael Dubail. At over 11 feet tall, Big Red, as he was affectionately known, was unveiled at Keeneland racetrack in 2019.

Tours can be set up at Keeneland, which is located in Lexington, Kentucky to view this magnificent sculpture.

Any horse racing fan will be in awe of seeing the sculpture of this iconic racehorse that captures his beauty and power.

What about Pegasus at GulfStream Park!

Beautiful! Thank you for sharing! 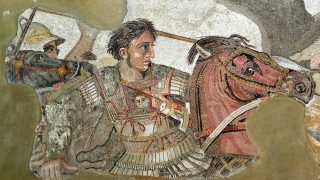