Horse racing has become a glamorous sport across the world. People flock to the most famous horse racing tracks in the world to catch a glimpse of the best of the best compete.

From the historic Churchill Downs to the new, luxurious Meydan Racecourse, these racetracks are among the world’s best. People will come to these racetracks sporting their Sunday clothes and finest hats. Not only are they home to some of the most famous horse races, but they have also become elite social venues where people enjoy dining and drinking.

Here are the 10 most famous horse racing courses in the world.

In 1875, Churchill Downs officially opened its gates in Louisville, Kentucky. With the ability to accommodate 165,000 people, it is the largest horse racing track in the United States.

Across the 147 acre facility, there is a one-mile dirt racetrack and a seven-furlong turf racecourse. The racecourse is famous for its beautiful architecture, particularly the signature Twin Spires that sit atop the grandstands.

Throughout the years, Churchill Downs has undergone several renovations, including the addition of an ultra-high-definition video board in 2013. The facility also has luxurious suites, a grandstand, and a stunning clubhouse. There is also fine dining and shopping available for quests as well. The racecourse also features the state-of-the-art Kentucky Derby Museum.

Epsom Downs, often referred to as the Downs, is located in Epsom, England. Many racing enthusiasts consider it the premier track in England for Thoroughbred racing, with the capacity to hold 130,000 people.

The first race at Epsom Downs was held in 1661, making it one of the oldest race tracks. The Jockey Club owns the course and it has strong ties with the Royal Family. Its most famous race is the Derby Stakes, which the Queen often attends. In addition, the racecourse also holds several other G1 races including the Oak Stakes and the Coronation Cup.

Unlike traditional racetracks that are oval-shaped, Epsom Downs is most similarly shaped to the letter U. The unique design requires horses to go from the top of the hill and make an immediate left-hand turn, then head straight downhill. The majority of the last half mile of the track is downhill, except the last 100-yard stretch which the horses must run uphill.

Unlike other racetracks in England that are more exclusive, Epsom Downs is a public area where people can come and watch races for free. The facilities offer dining options as well as allowing patrons to bring their own food and alcohol within certain areas of the racecourse.

Located in Flemington, Australia, Flemington Racecourse is Australia’s most famous racetrack. The historic course has been holding races since 1840 and has a capacity to hold 130,000 people.

Flemington is home to the Melbourne Cup, the world’s richest handicap. In addition, the track hosts several other prestigious G1 races including the Australian Cup, Victoria Derby, Turnbull Stakes, and VRC Oaks. The track even hosts steeplechase races as well.

The track’s shape at Flemington Racecourse is similar to that of a pear. It features a 1200 meter straight track, which is commonly referred to as “The Straight Six” course. The track’s circumference is just under 1 ½ miles and the races are run counter-clockwise.

In 2006, Flemington was added to the Australian National Heritage List. In 2000 and again in 2018, the facility underwent renovations, including opening a new member’s grandstand. The track also features dining options, a racing club, and a rooftop garden.

Located in Fuchu, Japan, Tokyo Racecourse was constructed in 1933. With the capacity to hold 223,000 people, it is currently the largest horse racing track in the world.

Tokyo Racecourse is considered to be the “racecourse of racecourses” in Japanese horse racing. The racecourse is home to numerous G1 races including the Japan Cup, Tokyo Yushun, and the Yasuda Kinen, which is part of the Asian Mile Challenge. The facility hosts both flat races and steeplechases.

In 2007, the course underwent renovations, including adding the largest video screen in the world at that time. The course offers a stunning view of Mount Fuji to the southwest. In addition to horse racing, the facility also includes dining, fine artwork, and even a playground for children.

Located in charming Ascot, England, Ascot Racecourse hosts both flat G1 horse races and three G1 jumps races. With approximately 600,000 visitors every year, it accounts for 10% of all racegoers in the United Kingdom.

For over 300 years, Ascot Racecourse has been home to some of England’s most prestigious races. The course was originally founded by Queen Anne in 1711, as she thought the land was ‘ideal for horses to gallop at full stretch’. The facility has the capacity to hold up to 70,000 people.

Today, Ascot is home to the Royal Ascot, the most prestigious horse race in the United Kingdom. The Queen, along with other Royals, attend this four-day-long racing event. The racecourse is also home to other notable races such as the Shergar Cup, Ascot Chase, and QIPCO British Champions Day.

The grass round track is a triangular circuit fourteen furlongs in distance, with a run-in of 2½ furlongs. It features a straight mile course, along with the Old mile course which meets the round course in Swinley Bottom. In addition to being a world-class racing facility, Ascot also has private boxes and fine dining.

Located near the city of Liverpool, England, Aintree Racecourse first opened up in 1829. The facility has a capacity of 75,000 people and is one of the most historic horse racing tracks in the United Kingdom.

Aintree is also home to some top-notch hospitality. The facility features multiple fine dining options along with private boxes.

As one of the oldest horse racing tracks in America, Saratoga first opened its doors in 1863. With a capacity of 50,000 people, it has attracted large crowds for decades.

Saratoga is home to America’s oldest major Thoroughbred race, the Travers Stake. The course hosts a total of 16 G1 races, with other noteworthy races including the Whitney Stakes and the Jockey Club Gold Cup.

In addition to flat races, Saratoga also hosts harness racing and steeplechases. The facility has three courses that are regularly used for racing. The main course, which is dirt, is 1 1/8 miles, the turf course is one mile and the steeplechase course is 7/8 mile.

Saratoga is commonly referred to as ‘The Spa’ due to the natural mineral springs near the course. It has been rated as one of the best sports venues by Sports Illustrated magazine. Seating is available in the grandstand, clubhouse, and picnic table, with dining options located within the facility.

Santa Anita Park is one of the most beautiful horse racing tracks, with palm trees and a stunning backdrop of mountains. Located in Arcadia, California the racetrack first opened up in 1907 and has the capacity to hold 80,000 people.

The first Santa Anita Park closed down in 1909 and then sadly burned down in 1912. Fortunately, the track was rebuilt only a few blocks from the original location, reopening on Christmas Day in 1934.

Santa Anita is home to some of the most elite horse races, including the Santa Anita Derby, Santa Anita Handicap, and American Oaks. On ten different occasions, the track has hosted the Breeders’ Cup. The park features a one-mile natural dirt main track that makes a turf course of 0.9 miles. In addition, it has a hillside turf track with the ability to accommodate races of different lengths.

Santa Anita Park features a unique art deco grandstand. There is a clubhouse along with suites and multiple restaurant options. A free Seabiscuit tour is available, allowing guests to get a glimpse of many exclusive areas of the park.

Though Meydan Racecourse has only been open since 2010, it has quickly become one of the most famous racetracks in the world. This luxurious racetrack is located in Dubai, United Arab Emirates, and has the capacity to accommodate over 60,000 spectators.

Meydan is home to some of the richest horse races in the world including the Dubai World Cup, Dubai Golden Shaheen, and Dubai Sheema Classic. The races attract competitors from all over the world. In addition to Thoroughbred racing, Meydan also hosts Arabian horse races as well.

Meydan is perhaps the most glamorous racetrack in the world. It includes the world’s first five-star trackside hotel where guests can watch the races from the comfort of their room. The modern grandstand includes world-class restaurants, a theatre, a gallery, and a racing museum.

Longchamp Racecourse is one of the most beautiful and historic racetracks in the world. Located in Paris, France, the track first opened up in 1857 and is able to accommodate 50,000 people.

Longchamp’s beautiful facility features a modern grandstand that has boxes and suites. The racecourse overlooks the Seine river, providing spectators with beautiful scenic views while they watch some of the world’s fastest horses race.

8 Facts You Didn’t Know About Seabiscuit
2

10 Most Famous Horse Races in the World
4 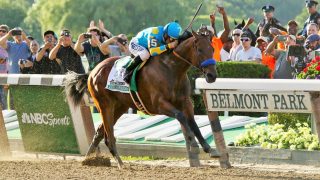 10 Most Incredible Horse Races That Made History 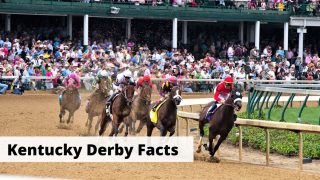 10 Most Famous Horse Races in the World
Most Read Now