There are over 600 horse breeds in the world today, each with their unique charm and character. Although all horses are pretty in their own way, there are certain beautiful breeds that capture the human imagination.

The admiration of horses goes back thousands of years in cultural artwork and literature. Some indigenous cultures even worshipped horses as gods!

To help you learn more about the history, stats, and fact of these stunning horses, see our list below of the most beautiful horse breeds.

Considered the most beautiful horse breed in the world, Friesians are native to Friesland in the Netherlands. Known for the striking black coat and long flowing mane, Friesians were originally bred to carry medieval European knights into battle.

Other than carrying noble knights in shining armor, Friesians also powered Dutch agriculture. Because of their elegant appearance and spectacular movement, they often pulled carriages for European royalty.

After the industrial revolution, this gorgeous breed a popular choice for carriage drivers, dressage riders, and even the film industry!

The breed nearly went extinct at the turn of the 20th century, with only 3 pure breeding stallions left. Lucky for us, the Friesian breed successfully recovered following the second World War.

The Friesian Studbook has strict rules for those who want to register their horses. Hence why all Friesians are black with no white markings and have those gorgeous flowing manes and tails.

The origins of the Arabian horse date back as far as 3,000 BC, which places it amongst the most ancient breeds in the world.

The beautiful and elegant features of the breed were shaped by the nomadic Beduin tribe of the Arabian Peninsula.

The Arabian horse has the potential to excel in almost any discipline. Due to their outstanding stamina, these horses are especially valued in the endurance sport.

Arabian bloodlines can be found in most modern horse breeds as they were used to add extra resilience and refinement.

Yet another ancient and beautiful horse breed, the Akhal-Teke is known for its unique metallic shine. Originally from Turkmenistan, the breed is estimated to be more than 3,000 years old.

As we mention in our rarest horse breeds guide, it’s believed there are roughly 6,600 Akhal-Teke’s left in the world.

So what makes these horses shine like gold? Well, the secret lies in the unusual structure of the hair that makes up their coat. The Akhal Teke Association of America explains that the opaque core of the hair shaft is replaced by the transparent medulla, which bends the light to create a metallic glow.

The Akhal-Teke’s hardiness makes it an excellent choice for long-distance riding, as well as most English disciplines. The famous perlino Akhal-Teke stallion Kambarbay has been declared numerously as the most beautiful horse in the world!

The Andalusian is a Spanish horse breed dating back to the 15th century. Due to strict selection criteria, its distinctive baroque appearance has remained unaltered ever since.

Similar to Friesians, they have long, thick manes and tails which makes them truly a sight to behold.

Andalusian bloodlines have influenced several modern horse breeds over the centuries. These gorgeous horses traveled on the ships of the conquistadors to the New World where some of them escaped and became today’s wild Mustangs.

Historically, Andalusians were often used for bullfighting and still are today in certain parts of Spain. They are also a go-to breed for classical dressage and filmmaking.

Haflingers are easily recognized by their chestnut coloring and flaxen manes and tails. They originate from the mountainous region of Hafling located in Austria and Northern Italy.

The thought behind the Haflinger horse was to create a versatile breed that is ideal for forestry and agricultural work as well as riding and driving. They even serve in the Austrian Army as they are extremely sure-footed on rough terrain.

This beautiful golden horse breed is easy to keep and they have a long lifespan.

Haflingers are great all-rounders and also frequently used for equine-assisted therapy. Their calm and kind nature, smooth gaits, and swinging back makes them ideal for this kind of work.

The heavyweight champions of the horse world, Percherons were originally used as war horses in the former Perche province of Western France.

Similar to Clydesdales, their primary role soon became the powering of agriculture and hauling of heavy cargo. They have also been distributed to the United States in the late 19th century.

Percherons are usually white or black in color. Although very heavily muscled, they are relatively delicate and agile for a draft horse. This is due to the addition of Arabian blood at the turn of the 19th century.

Their immense pulling power makes these horses ideal for all types of draft work. In France, Percherons make up the majority of draft horses.

Also read, how much weight can a horse pull?

Crosses of Percherons and warmbloods have even resulted in the breeding of successful dressage and show jumping horses!

The Lipizzaner horse was created in the 16th century by a stud farm in the Austrian Empire. It is closely related to Spanish, Arabian, and Barb horses. Today, this beautiful grey or white horse breed is the national horse of Slovenia.

Lipizzaner horses are used by the famous Spanish Riding School of Vienna where they perform advanced classical dressage. The horses arrive at the school when they are four years old and are usually fully trained by the time they reach 10.

Other than dressage, the Lipizzaner also performs well in show jumping and eventing due to their athletic build. They are most widely used in countries of Middle Europe.

All Lipizzaner horses are born black and mature into a light grey color. Black, brown, and bay versions also exist, although extremely rare.

The Marwari is a beautiful horse breed native to North-Western India. It is different from all other horses in that it has exotic-looking inward-curving ears.

The breed is closely related to the Kathiawari horses, with which it shares this unusual feature. Frankly, both breeds are known to have exceptional hearing!

Traditionally, owning a Marwari was the privilege of Indian royalty and nobility. The horses were treated as part of the family, often wearing tack adorned with jewels. Marwari horses were also valued warhorses due to their bravery and remarkable ability to find their way home.

The Marwari is a very athletic horse and performs well in most English disciplines including polo.

The beautiful Gypsy Vanner is the horse of the Irish Travellers and is a common sight in Ireland as well as the British Isles. It is a relatively new breed, with the official registry founded in 1996.

However, some sources suggest that Gypsy Vanners have been purposefully bred since the Second World War. Their predecessors are thought to be colored Shire horses which the Romani selected to fit the role of pulling their wagons.

The Gypsy Vanner is a cob-type horse with a long flowing feather on the legs. Commonly found with a black and white-colored coat.

Known for their funny mustaches, Gypsy Vanners are beautiful giants and an integral member of Romani families. These horses are still used today in the carriages of the Romani travelers. It is also a great children’s pony and often ridden in amateur competitions.

Established in the early 19th century, the breed can be traced back to a chestnut mare with leopard markings. At one point they were the mounts of the Danish cavalry, but their peculiar leopard coat made them an easy target.

Found in both horse and pony sizes, the Knabstrupper is a good all-rounder both under saddle and in harness. They are also widely used as circus horses.

Due to their head-turning coat, Knabstruppers were used in the ceremonies of the Danish royalty.

As the name suggests, this breed originates from the Black Forest region of Germany. The official studbook opened in the late 19th century and to this day it only registers horses of chestnut color with a flaxen mane and tail.

The breed is often referred to as the “Golden Retriever” of horses due to their outstanding patience and gentle temperament.

The ancestors of the Black Forest horse were originally used in forestry and agriculture. Today, the breed is a popular all-rounder for both riding and driving. The breed is currently under “endangered” status and is protected by the German government.

The stars of the ever-popular Budweiser commercials, Clydesdale horses are known for their thick, flowing feathers, white blaze, and docile temperament.

This charming breed comes from the Clyde river valley in Lanarkshire, Scotland. During the 19th and 20th centuries, they were exported in large numbers to Australia, New Zealand, and the United States where they became popular farm animals.

As large draft horses, they originally were and are still used for agriculture and forestry work. Pleasure riders and drivers also enjoy Clydesdales as they’re easy to train and move great in harness.

Along with Shire horses, Clydesdales have also been selected for the honor of parading on royal ceremonies as drum horses. Other than that, this huge horse breed is often seen on equestrian shows of all types due to their magnificent appearance and movement.

They should have put up a photo of the original Akhal-Teke horse! The original had a pure golden gleaming coat and looked like it was from a dream. The tan and grey Akhal-Teke in this photo isn't the original.

I loveeee Clydesdales. I do think, however, that the Trakehner should have been on that list. For some, it really just comes down to opinion. :) Great list! It really comes in handy when choosing a horse breed for showing...

Thank you for your wonderful feedback!

That's the thing, there're so many beautiful horse breeds in the world. It's extremely hard to choose just 12 😂

Absolutley gorgeous. I was very blessed in my life to see all these breeds except 2 in person.I had the opportunity to own a Haflinger,wish I still had him and a Percheron. My favorite color is Palomino.

Thanks for sharing, that's lovely! 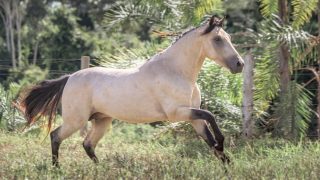 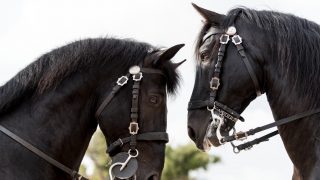 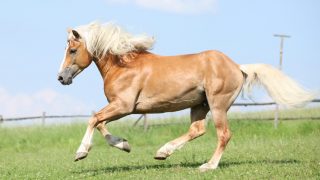