From the 1922 Newbery Honor Book King of the Wind to finely-bred competitors in the 2004 movie, Hildalgo, Arabians have become a legendary breed for all horse lovers. In fact, the oldest domesticated breed is the Arabian horse.

An Arabic tribe known as the Bedouins were the first Arabian horse breeder. To the Bedouins, these horses were a prized possession. The Arabians spread through England and France. In fact, the first Arabian in the United States belonged to George Washington. Washington’s Arabian stallion bred with cavalry mares to strengthen America’s military.

However, under the order of the sultan, none of the prestigious pedigreed horses was taken. International visitors became intrigued by the Arabians. The Bedouins sold these horses in the Americas before returning home. Due to the increased interest in Arabians, the Arabian Horse Club of America formed 15 years later.

The media has portrayed Arabians as almost gods and goddesses. From photographs to movies, Arabians have starred in it all.

Marguerite Henry’s novel King of the Wind tells the fictional story of a young mute groom who saves a Godolphin Arabian colt with both lucky and unlucky markings. As the Arabian colt grows into a racehorse, the Moroccan sultan chooses the mute groom and five other grooms to accompany six Arabians, including the colt, to France.

However, the journey does not end there. Both groom and Arabian overcome many trials throughout this adventurous tale. Peter Duffel directed and released the movie adaptation in 1990.

Walter Farley’s book series, The Black Stallion, engages readers in a journey of an untamed Arabian stallion and a teenaged boy. Throughout the first book, the boy and the stallion are placed in the middle of a crisis in which they must depend on each other for survival.

The two soon establish a strong relationship of trust. The series follows the tale of the stallion and his three offspring, Satan, Bonfire, and Black Minx. Many directors have created movie adaptations through the late 1900s and early 2000s.

According to documentation over 3,000 years old, adaptations have not occurred in the Arabian. From the start, Bedouins only allowed the best of the horses to reproduce.

The unique structure of the Arabian proves to be functional. A dished head and flaring nostrils provide greater air intake, along with a large trachea and deep chest cavity for increased lung capacity. The arched neck shape defines the windpipe. An Arabian’s head width provides room for a larger brain, attributing to an intelligent nature.

Arabians are bred to continue working under desert conditions. Therefore, the Arabian increased their stamina. From the Bedouins to modern-day people, the breed tends to easily bond with humans. They also commonly have a desire to please and a faithful deposition. Typically, Arabians outlive other horse breeds by living over the age of 30.

About 90% of the American Endurance Ride Conference members compete on Arabian and part Arabian horses. Traditionally, Arabians always finished among the top on the Tevis Cup, known as the oldest endurance competition.

“The Arabian is the horse every besotted little girl draws; he looks like a fairytale.”

-William Shatner’s Spirit of the Horse: A Celebration in Fact and Fable

Without question, Arabian horses are a legendary breed, displaying beauty and historical traditions. Indeed, the Arabian horse is a window into the ancient world for all horse lovers. 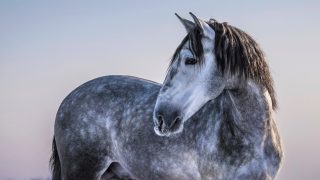