As one of the most famous horse’s in history, Bucephalus was Alexander the Great’s trusty steed. The two had a strong bond, as Alexander dearly loved his faithful companion.

Alexander the Great’s horse, Bucephalus was a stunning black stallion with a white star on his brow. Fierce and loyal, the once untamable horse was Alexander’s trusty mount for every battle he rode in. Bucephalus had impeccable breeding, coming from the “best Thessalian strain” of horses.

The Origin of Alexander the Great and Bucephalus

Bucephalus was first offered to Alexander’s father, King Philip II of Macedonia, in 346 BCE by horse trader Philoneicus of Thessaly. Taller than the normal Macedonian steed, Bucephalus had a huge price tag at 13 talents, which was around three times the cost of the average horse.

However, no one was able to manage him, as he was too wild and would rear when anyone sought to ride him. Sources describe him as a massive creature, with a massive head, making him a sight to behold with his wild spirit.

Phillip II ordered the horse to be taken away, but 13-year-old Alexander insisted he could tame the mighty stallion. Alexander made a deal with his father that if he failed to tame Bucephalus, he would pay for the stallion himself. However, he stunned the crowd by subduing the fiery stallion.

How Did Alexander the Great Tame Bucephalus?

Alexander tamed Bucephalus by calmly approaching him, speaking soothingly to the stallion. Realizing that Bucephalus was distressed by the sight of his shadow, he calmly turned the horse’s head toward the sun. After this, Alexander was able to bridle him and mount him, taming the incredible stallion.

Phillip II found Alexander’s work impressive, promising his son would secure himself a larger kingdom, as Macedonia was too small. Bucephalus went on to become Alexander’s loyal mount. Bold and powerful, he dearly loved the stallion.

Many historians believe that taming the wild Bucephalus was also a turning point in Alexander’s life. The young prince demonstrated the confidence and determination he showed during his conquest of Asia.

How Did Alexander the Great’s Horse Get His Name?

Bucephalus got his name from the Greek words “bous” and “kephalos.” “Bous” means ox and “kephalos” means head.

Bucephalus was Alexander the Great’s mount in numerous battles. He rode the black stallion from the conquest of the Greek city-states, along with Thebes, and even into India.

During the final defeat of Darius III, Bucephalus was kidnapped while Alexander was away on a journey. After returning, Alexander was furious about the kidnapping, promising to cut down every tree and lay the countryside to waste, in addition to slaughtering every person within the region. The kidnappers quickly returned Bucephalus, desperately pleading for mercy.

What made Alexander’s riding skills on the spirited Bucephalus all the more impressive is that Greeks rode without saddles. Since they had no stirrups for balance, they had to rely on their strong horsemanship skills to stay on in battle. Oftentimes, if a rider missed their target in battle, they would fall off their horse.

How Did Bucephalus Die?

Historians disagree on how Bucephalus died. Some say he died of wounds from the Battle of Hydaspes in 326 BCE, whereas others believe he died of old age 30 after this battle.

In mourning of the loss of his beloved horse, Alexander went on to found the city of Bucephala, named after Bucephalus. Many believe that Bucephala is the modern town of Jhelum, Pakistan. It is believed that Bucephalus is buried in Jalalpur Sharif, which is outside Jhelum, Punjab, Pakistan. A different account says that he is buried in Phalia, a town in Pakistan’s Punjab Province.

What is the Mythical Version of How Alexander the Great and Bucephalus Met?

There is also a mythical legend of how Alexander the Great and Bucephalus met. As the tale goes, Bucephalus was bred and presented to Philip on his own estates. The stallion had heroic characteristics that surpassed even those of Pegasus.

The romance by the Delphic Oracle also goes on to further reinforce the mythical attributes of the stallion. It goes on to say that the destined king of the world will be the one who rides Bucephalus, the horse with the brand of the ox’s head on his haunch.

What Breed Was Bucephalus?

Some historians believe that Bucephalus was an Akhal-Teke, though no one knows for sure what breed he was. He came from the famous breeding region of Thessaly, Greece which was famous for its beautiful horses.

The stallions in Thessaly were highly regarded, as they produced many top-quality offspring. Breeding stock in this region was often crossed with Scythian and Persian (Nisean), in addition to Ferghana horses. Persian Arabians, along with the Akhal-Teke, also have a rich history in this region.

There are many famous depictions of Bucephalus in art. Many historians believe that he is the horse in the Alexander Mosaic, that was uncovered at the Roman site of Pompeii.

Paintings by Charles Le Brun of Bucephalus are on display in the Louvre in Paris. A monument of Bucephalus stands in Larissa, Greece that tourists can visit. The famous horse comes up many times in literature and films. His legacy still lives on today. 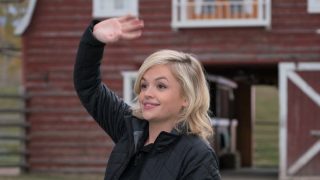