Have you ever wanted to own a one of a kind piece of American history? Well, now you can.

The Bureau of Land Management is hosting an adoption event this weekend where potential adopters can view wild horses and burros seeking their new homes.

In order to encourage adoptions the Bureau of Land Management, or BLM, is offering a $1,000 incentive for adoption.

Previously, adopters would have to pay $125 to adopt an American Mustang or burro. However, the BLM’s new incentive program hopes refresh interest in adoptions.

Of the $1,000 granted, $500 will be awarded at the time of the adoption and the remaining $500 will be given when owners show they have responsibly provided for the animal for a year.

The horses and burros available range in age from yearling to adulthood and have a rich history. These previously free-roaming horses were descended from horses who were brought to the Americas by the Spanish.

The Spanish horses were either turned loose or escaped and were the foundation for the American Mustang. Over time, other breeds and types of horses also contributed to the modern Mustang. Now, some Mustangs still display Spanish type features while others resemble drafts or quarter horses.

They may be of any coat color and are known for being surefooted. Because of their mixed ancestry, the height of a mustang can range anywhere from 14 to 15 hands, and are not taller than 16 hands.

In the early 1900’s, thousands of these mustangs were rounded up for use in the Spanish-American War and World War I. The Wild and Free-Roaming Horses and Burros Act of 1970 provided guidelines for protecting these animals and set up the current adoption program.

Land that is set aside for free-roaming horses can only support 27,000 animals. Unfortunately, it is estimated that 88,000 wild horses are in America right now.

Consequences for leaving the mustangs unchecked is overgrazed land which will result in starving horses. The solution the BLM has come up with is rounding up these animals and placing them in holding pens while they wait for adopters. 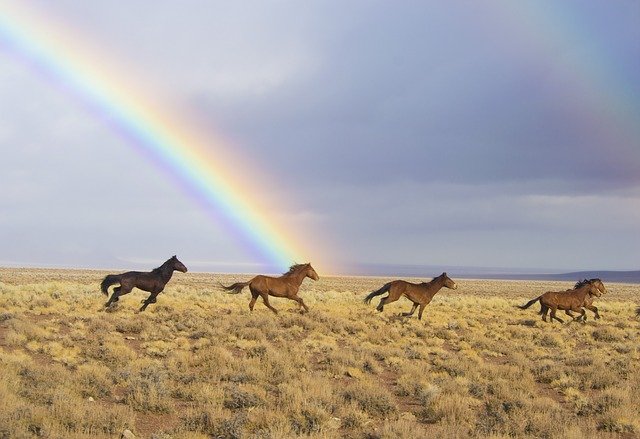 Approximately 50,000 mustangs are currently in holding pens. It has been said that the BLM spends $50 million of it’s $80 million annual budget on caring for the horses and burros in the holding pens.

The cost of keeping a horse in a holding pen for a year is approximately $2,000. Horses that are not adopted are kept in long term holding pens instead of being euthanized. This practice costs taxpayers up to $50,000 per horse over the course if it’s lifetime.

Rather than continue to spend taxpayer money by keeping horses in pens, the BLM realized it would be cheaper to offer the adoption incentive than it would be for them to keep a horse for a year.

The BLM reports that adoptions have gone up 40% since the incentive program began in March of 2019.

This weekend’s adoption event will begin on January 11 from noon-6 P.M. at the Rio Grande Valley Livestock Showgrounds in Mercedes Texas and will continue on Saturday from 8 A.M.-noon.

How to Adopt a Horse

Potential adopters must be at least 18 years of age, have no history of animal abuse, and have a minimum of 400 square feet of corral space on their property.

Applications will be approved on site and parties may adopt up to four animals at a time. The BLM also has specific requirements for trailers and fencing, these requirements can be found on their website.

Can you please tell me how I can get adopt a wild horse in Kingsburg Ca. I've had horses before but I don't anymore. I have plenty of room for a horse, Please send information where I can find one,

I would love to have 2 Mustang's. I currently have 2 horses, Rusty is my amazing quarter horse. He was a rescue and very pitiful and sad when I brought him home. That was 3 years ago. Now he is vibrant and healthy. Gets a lot of love and attention. He's amazing. I honestly believe we saved each other. My other horse, is Princess. She's a miniature horse. So very sweet, they both are. She was abandoned here with me. Thank God she was and still is very healthy. I have 6 acres, 5.5 of those are for my horses. I take very good care of them and love them deeply. Please send me any information possible. I live in Tennessee, so we are very fortunate to have all four seasons. I know in my heart that the Mustang's would be very happy here with us. They would definitely be respected and loved.

I'm Renee and have had my horses for a while now. I have had Rusty for 4 wonderful years. When I first got him, I was honestly scared. His health seemed so poor. But if I hadn't brought him home, he was going to be slaughtered. I couldn't let that happen. I fed him, spent time with him and nurtured him. Most of all, I loved him. I earned his trust. Now, he's 15.3 HH and a beautiful piece of my life.

Princess has been with me for 3 years now. Still very healthy and loving. I only had to earn her trust. That was done with respect and love. She now runs to the gate when they hear me pull in the driveway. I can step outside, and here comes my babies.

This is just a little information for you so that you will know that if I can get 2 Mustang's, or even 1, they will be treated with so much love. They would truly be happy here in Tennessee with us.

When will this end I would like to adopt 1 horse.

I would like more info on adopting these horses and procedures

Love to have four of your mustangs if possible could you deliver them to Kentucky where I'm at look for $50,000 for the transportation of them to Kentucky of 75 acres to put them on they will be loved and cared for